The tooling for the squarebody GM pickup was introduced in 1977, representing a 1975-1977 model Chevrolet K10 stepside. This is kit 2228 and is molded in black plastic. Represents a stock pickup with an optional winch, sunroof, gun rack (with guns), tailgate-mounted spare tire carrier with jerry can, and roll bar with lights. Wheels are 6-bolt GM rallye rims and Goodyear Tracker A-Ts. 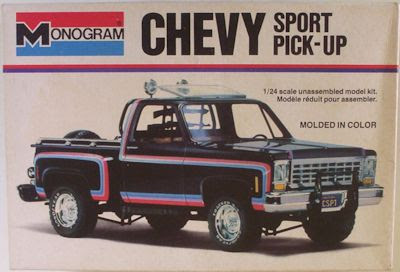 For 1978, the tooling was either modified or appended to represent a 1978 GMC styleside shortbed pickup. Kit 2236, molded in a red/orange plastic. Options include a roll bar with lights and bed rails. Wheels are GM 8-bolt, 10-hole mags and Goodyear Tracker A-Ts. 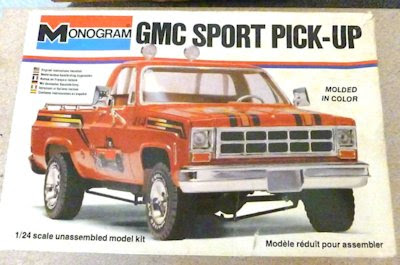 Also in 1978 a separate but related tooling was created to represent a 1975-1977 Chevrolet Blazer, kit 2238. At some point in the tooling process, the body mold was damaged. This resulted in door handles that are markedly smaller than those on the related pickup kits. Molded in red plastic, this kit builds up as a completely stock truck with a tailgate mounted spare tire carrier and jerry can. The rear section of the roof is a separate piece, allowing for the option to build with the roof attached or removed. The included wheels are incorrect 5-bolt chrome wagon wheels (most likely those shared with the Jeep CJ-7) and Goodyear Tracker A-Ts. 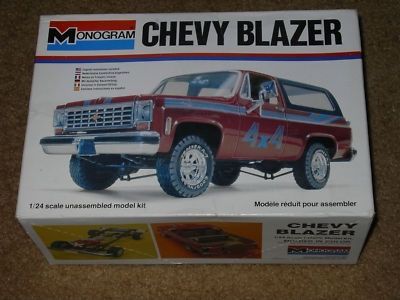 For 1979, the Blazer tooling was modified and appended to make a GMC Jimmy. Modifications to the original Blazer include the grille, Hickey step-down hood, and molded-in air dam for the front bumper. Options include a Hickey brush bar, roof-mounted lights, sunroof, and fender flares. Kit 2248, molded in off-white plastic. Wheels are 6-bolt, 5-slot mags and Goodyear Tracker A-Ts. 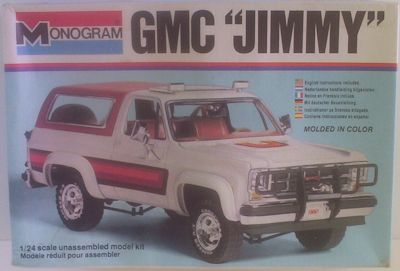 For 1980, the Jimmy tooling was reverted back to a Blazer to represent a generic law enforcement vehicle. This issue retains the Jimmy’s 5-slot mags and optional parts, as well as a set of headers. Kit 2249, molded in red/orange plastic. This issue seems to have been run at least twice. Options include roof-mounted light bar with siren horn and decals for Big Horn County Sheriff’s Department. Tires are Goodyear Tracker A-Ts. Second run replaced the Goodyears with PCV Desert Dawgs; an instruction sheet insert was issued indicating the tire change. 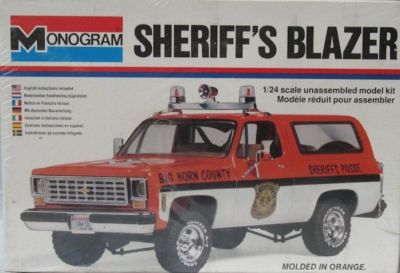 Also in 1980, the original 1977 tooling of the Chevrolet stepside pickup was reissued. This kit, 2264, was molded in yellow plastic and retains all the original components. Wheels are GM 6-bolt rallye rims and Goodyear Tracker A-Ts. 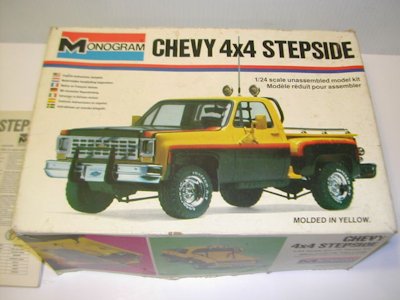 For 1981, Monogram introduced their High Roller series of kits with lifted suspension and big tires. The only GM pickup representation was the GMC styleside pickup from 1978. Modifications to the tooling include raised suspension and lengthened driveshafts. Kit 2273, molded in red/orange plastic. Box art shows 6-bolt, 10-hole GM mags, however the kit actually contains the 5-bolt chrome wagon wheels specially tooled for the Ground Hawg tires. 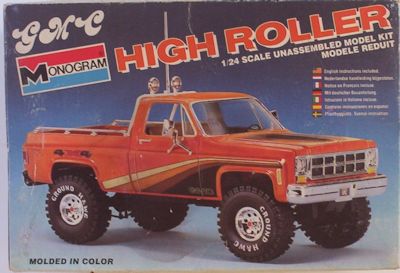 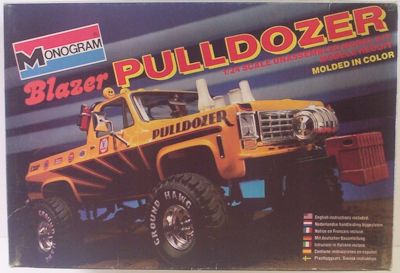 With a monster truck craze sweeping the nation in 1985, the GM pickup tooling was revisited again. The first kit issued was the Monster Mash, kit 2420. This kit uses the styleside bed from the GMC and the cab and grille from the Chevrolet. A new hood was molded to allow the high-rise intake manifold to stick out. Suspension was modified to depict a typical mid-80s monster truck. Options include roll bar with lights. Molded in red plastic. Wheels are generic monster truck rolling stock. 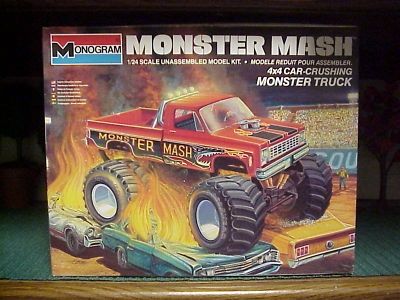 The second monster truck for 1985 was the Hammerhead Shark, kit 2421. This is a straight reissue of the Monster Mash, molded in blue plastic and different decals. 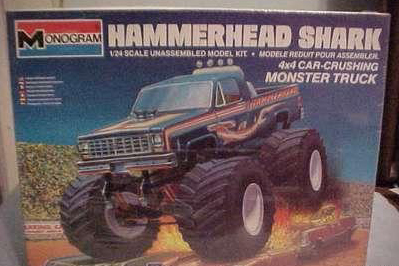 Keeping with the monster truck craze, the Monster Mash kit was reissued twice in 1990. Kit 2426 was molded in yellow plastic and issued as the Demolisher; a second issue, kit 2427, was molded in pink plastic as the Ground Pounder. 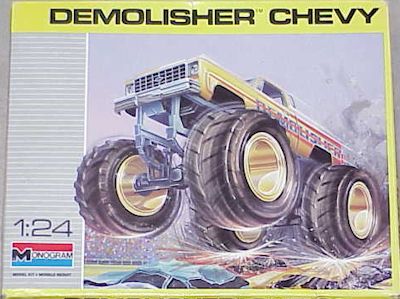 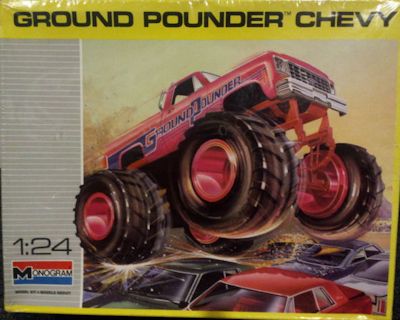 The tooling sat dormant until 1992 when Monogram decided to reissue the original stepside tooling once more. Boxed as kit 2963, this issue seems to have had two runs; one in blue plastic and one in aqua plastic. Box contents are identical to 1977 and 1980 issues with the exception of a new decal sheet. 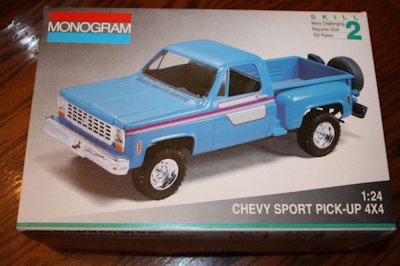 After Monogram’s purchase of Revell, the Blazer tooling was revisted in 2000. A straight reissue of the Pulldozer, this version swapped the GMC grille for a Chevy and was dubbed the “Mad Mudder” with a new decal sheet and molded in white plastic. Revell kit 85-2584. 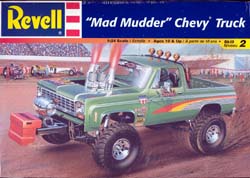 After a long absence from the catalogue, in 2012 Revell revisited the tooling once again to release a stock GMC styleside pickup. Options are the same as the original 1978 issue, with the addition of an optional snow plow and the Chevrolet’s tailgate mounted spare tire carrier and jerry can. Revell kit 85-7222, molded in white plastic and an all-new decal sheet. Wheels are 8-lug GM 10-hole mags and blank sidewall tires (Goodyear Tracker A-Ts). 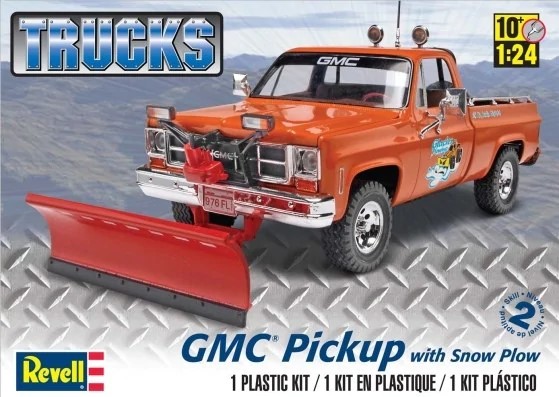 The next reissue of this tooling appeared in 2018 as the ’78 GMC Big Game Country Pickup. This appears to be a modified re-release of 1981’s High Roller issue with an entirely new decal sheet including camouflage patterns. Following Revell’s license-free tire policy, the Ground Hawg lettering has been removed from the sidewalls, which would allow for proper mounting of the directional tires. Also keeping in current trends this kit is molded in white and carried the stock number 85-7226. 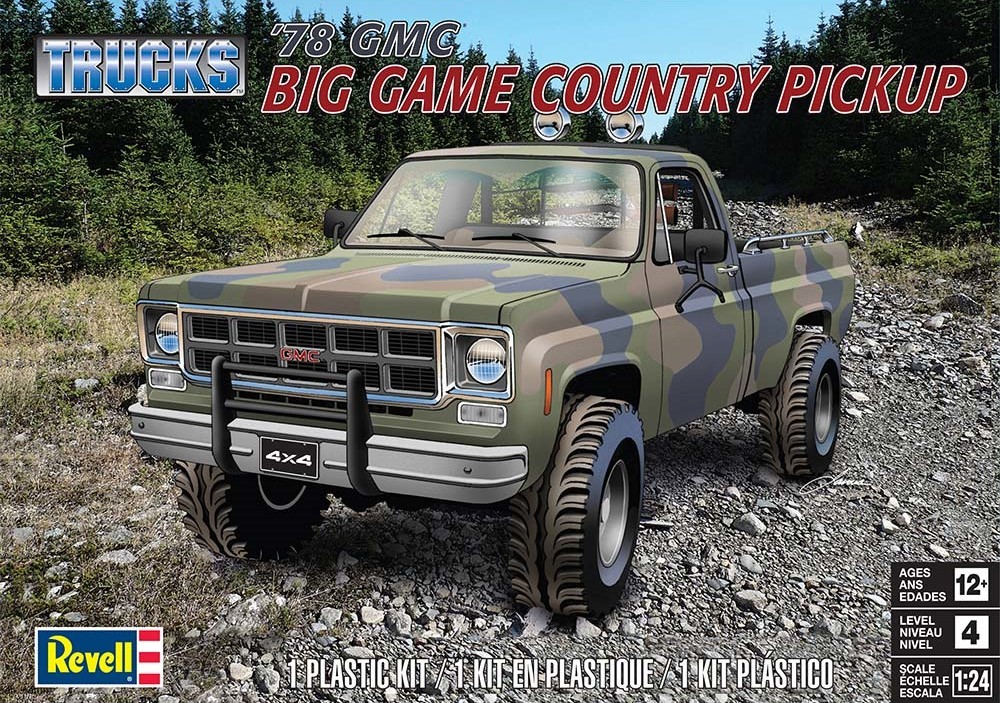 For the first time since 1992, the Chevy Sport Pickup has returned to the catalogue for 2019. A fresh decal sheet similar to the recent GMC issues seems to be the only differences from the last issue of this kit, save for being molded in white. Stock number 85-4486. Originally posted on Model Cars Magazine message board 6 March 2012. If you would like to share this article, please remember to credit the source.