This article is intended to cover the glue kits of the fifth generation of Chevrolet El Camino from 1978-1987 tooled by MPC and later issued under the AMT/Ertl  brand. MPC produced promotional models for Chevrolet for this vehicle in various factory colours throughout the years, far too many to capture in the scope of this article. Having the promo contract ensured year-to-year changes in the kits, as shown below.

The first glue kit released by MPC was in 1978 at the start of the new El Camino body style. The truck depicted is the 1979 Royal Knight appearance package, containing a small-block Chevrolet V8, Turbo-Hydramatic transmission, single exhaust, and bucket seats with console interior. Options for this issue were a tonneau cover and roof spoiler. The rolling stock consisted of Goodyear Polyglas tires and Chevrolet rallye wheels. This kit was released with the stock number 1-0420 and molded in black. In 1979, the tooling was updated and slightly modified to depict a 1980 model year GMC Caballero with the El Diablo appearance package. Modifications to the tooling from the previous issue consisted of an updated grille, shaved quarter panel emblems, shaved tailgate emblem, and GMC engraved rear license plate. Optional parts were the same, with the addition of side exit dual exhaust and snowflake-style wheels. The Goodyear Polyglas tires carried over. Molded in blue, this issue carried the stock number 1-0754. 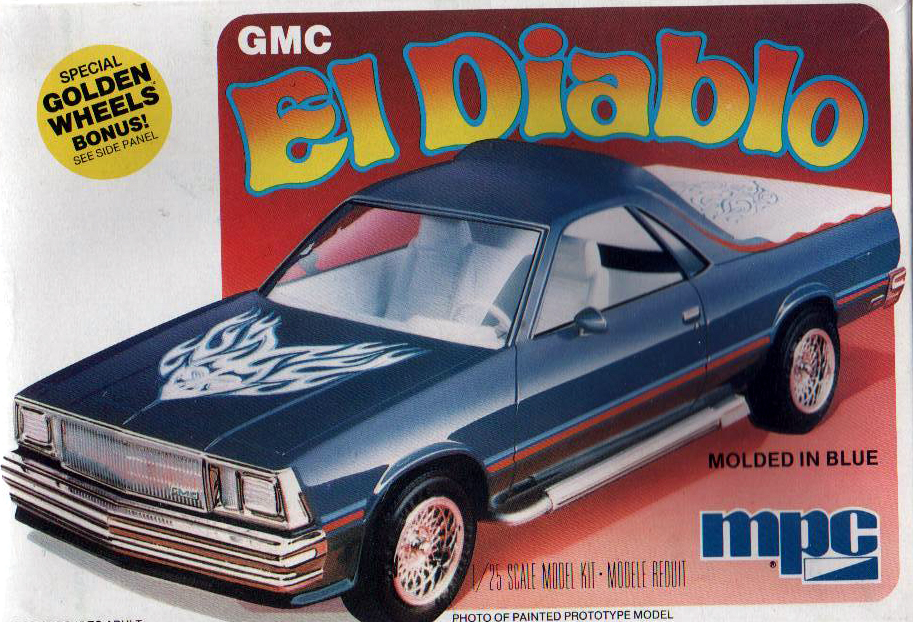 Continuing with the annual updates, in 1980 the tooling returned to the Chevrolet body with the updated grille. This issue is otherwise identical to the El Diablo. Again molded in black, stock number 1-0760. For 1981, the El Camino received a new camper shell and Centerline wheels as well as a new decal package depicting the Branding Iron Custom Camper. All the other previous custom options are also included. Molded in orange with the stock number 1-0854. The biggest modifications to the El Camino tooling came in 1982 as a reflection of design changes for the 1982 model year, changing the front end to quad rectangle headlights from dual rectangle and a flush grille. The dash remained as the ’78 through ’81 style, however the seating arrangements were changed from buckets-and-console to a bench. Packaged as the Red Light Bandit street racer, custom options were a large front air dam, supercharger, hood scoop, and turbine-style wheels. To accommodate the wider wheels, the tires were swapped for Goodyear Polyglas GTs. Molded in red with the stock number 1-0857. 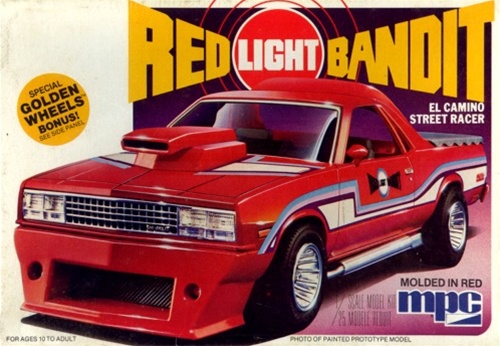 MPC’s promo contract with Chevrolet ended for the 1982 model year, and as such the tooling sat dormant until 1984 when it was revived and modified into a monster truck. Along with the monster truck suspension, additional parts included zoomie headers, brush guard with winch, and a roll bar with lights. This version was molded in yellow and carried the stock number 1-0453. As 1984 was a transition year for the MPC brand, there were various boxes printed with Fundimensions and Ertl logos. After a long slumber, this tooling was revived and modified in 1991. This time, the nose was modified to reflect the Choo Choo Customs El Camino SS body kit for the 1986 model year. Other modifications include updating the dash to the ’82 through ’87 style, the return of bucket seating, updated rallye wheels, and omission of all other custom parts save for the tonneau cover. Rolling stock was Goodyear Polyglas GT tires and both styles of rallye wheels. The original issue was molded in AMT grey and carried the stock number 6964. Straight reissues of the El Camino SS continued for 2001, number 30074. Note that the photo of an actual vehicle does not reflect box contents (wheels). For 2018, the El Camino SS was reissued again, this time molded in dark blue with a new decal sheet and including a trail bike. Rolling stock was updated to pad-printed Goodyear Radial GT tires, stock number MPC888. Originally posted to the Model Cars Magazine message board on 8 January 2014. Thanks goes to the membership for correcting some of my original assumptions regarding year-to-year kit changes.

Please feel free to share this article, however please include this page as the source.