History of Revell’s Dobbertin Pro/Street Chassis
As part of a branding deal between Revell and HOT ROD Magazine, for 1987 Revell released a 1:25 scale kit of the first HOT ROD Magazine Hot Rod of the Year: Rick Dobbertin’s 1985 Pontiac J-2000 Pro/Street car. This car set the standard for the nascent pro/street style of car building and was the pure distillation of the genre. The tube-frame chassis is completely hand-fabricated of polished stainless steel over which the J-2000 body shell is fitted.

The drivetrain consists of an all-aluminium small-block Chevrolet engine topped with dual Magnacharger blowers. The blowers are fed by twin Roto-Master turbos which draw air through a Holley 1050 carburetor. Also part of the induction setup is a 20-port nitrous system as well as water/methanol injection. Behind the engine is a polished, aluminium-cased Lenco four-speed transmission delivering rotation to a 20.5” wide Dana 60 rear axle.
The suspension consists of solid mounts in the rear with wheelie bars and Macpherson struts in the front. The wheels are Monocoque 15×3.5 in the front and 15×20 in the rear. The actual car featured Pneumat 5.60×15 tires in the front and Mickey Thompson 33×21.5×15 tires in the rear, however for the model Revell included Moroso Drag Special 5.50×15 tires in the front and Firestone 33×17.0x15 tires in the rear.
The kit engine is built up from 26 parts out of which 15 are chrome-plated. The block/transmission are molded together in two halves, upon which the intake manifold, dry-sump oil pan, water pump, and heads are affixed. Off of this is built the dual-blower setup, nitrous system, three belt assemblies, blower intakes, one-piece turbo and manifolds, carburetor, and velocity stacks.
The starting chassis plate for this model consists of the real car’s louvered belly pan, wheel tubs, and the bottom tubes of the chassis with lower control arms molded as one piece. The completed engine assembly must be attached to the chassis plate first as the transmission and driveshaft are captured by the transmission tunnel and firewall. The remainder of the tubular chassis as well as spare interior components are built off of this.The exhaust for the J-2000 consists of straight pipes out of the turbos that exits immediately behind the front wheels. The rear axle features a three-piece differential, with the front and wheel-attaching pieces being bare plastic while the differential cover is molded in two halves with the mounts and wheelie bars and plated chrome.

The interior door panels attach to the inside of the body. The body is composed of five pieces: main body, rear bumper, front clip, nose cone, and removable hood. The hood also is topped off with a two-piece scoop. This allows a displayed model to tilt the front clip and body off the chassis just as the real car.

This kit was molded in yellow plastic with chrome plated, clear, and transparent red accessories as well as black vinyl tires. The only decals included are used to duplicate the graphics of the actual car. The only issue of the J-2000 carried the stock number 7156 and was part of the HOT ROD series of kits. 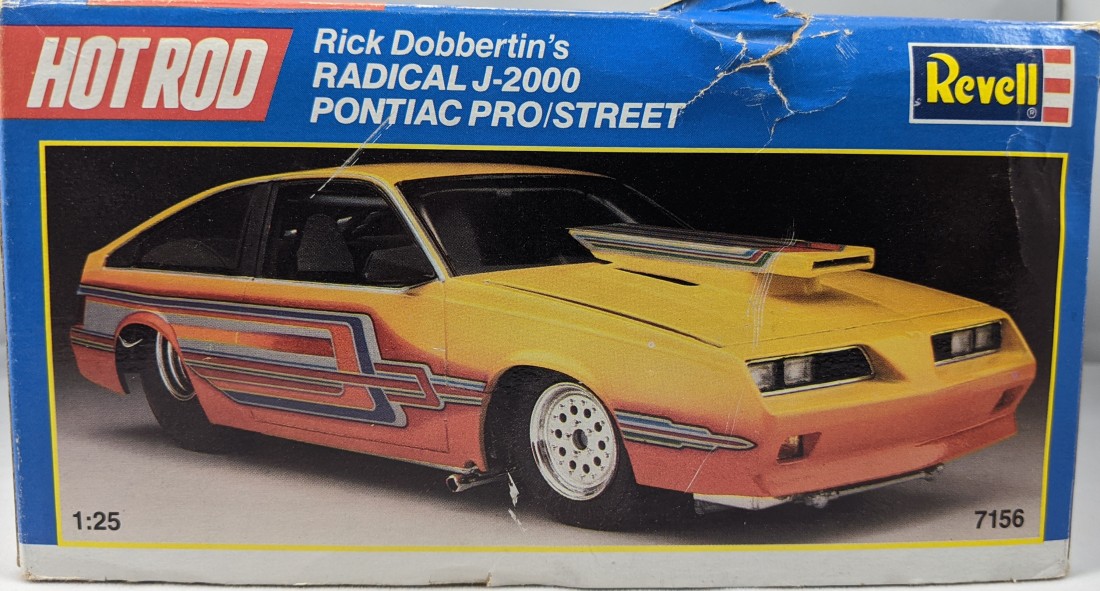 To maximize tooling costs, a companion to the J-2000 was also released in 1987 as the Corvette Pro/Street, again as part of the HOT ROD series. 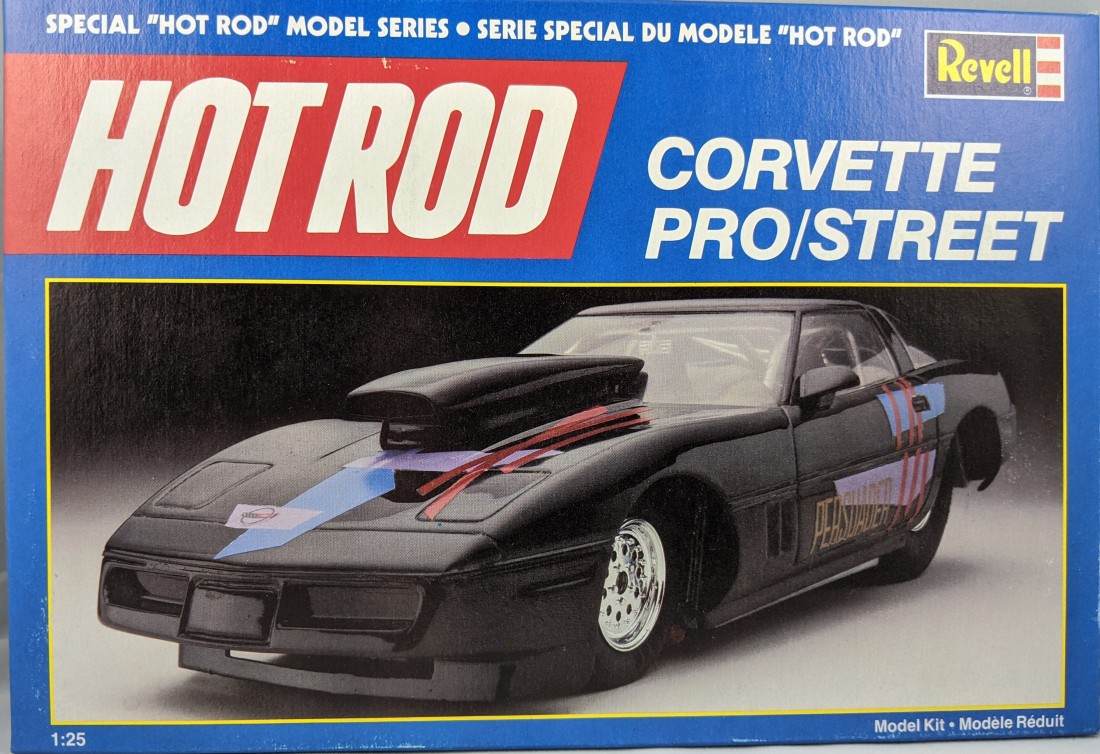 Newly tooled for this issue is the three piece body (body, nose cone, tail panel) with non-removable hood and a two-piece hood scoop. Also newly tooled and specific to the Corvette are interior panels and roll cage roof bar section. The engine was simplified for this and future iterations of the Dobbertin chassis to remove the twin turbo and carburetor setup, leaving the dual blowers, nitrous, and injection system.
The solo HOT ROD branded version of this kit was molded in black with chrome accessories, tinted clear windows, transparent red tail lights, and black vinyl tires and carried stock number 7157. The decal sheet is once again limited to exterior graphics as “The Persuader.” 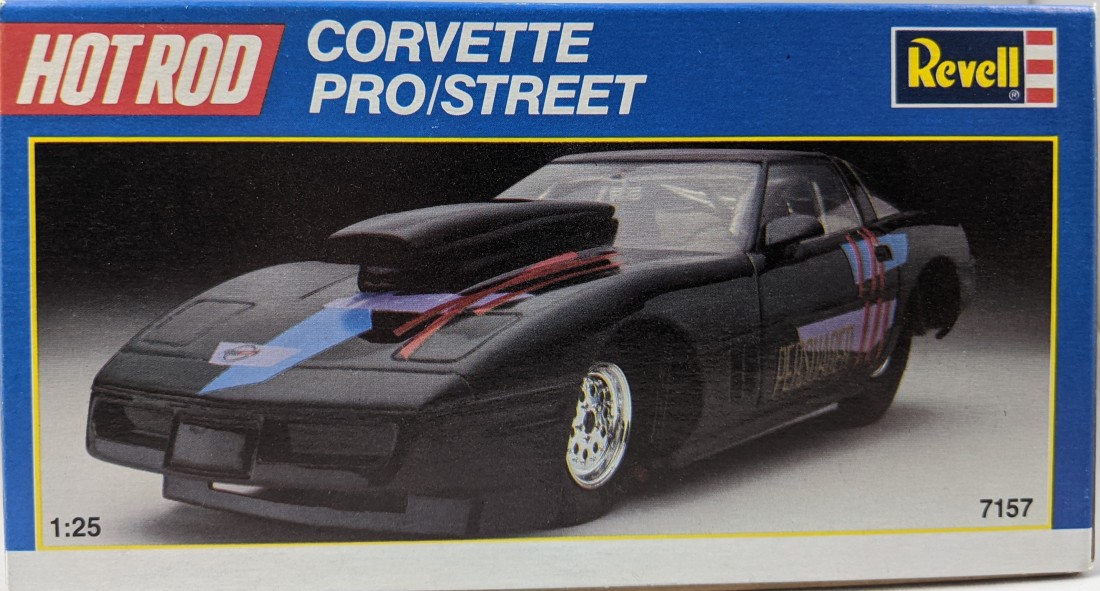 In 1988, the Corvette was included in the Ultra Rods combo along with a C3 Corvette and a ‘69 Shelby Mustang. This version was molded in white and while the box art referred to the car as the Ultra-Vette, the decal graphics dub the car “Bad Boy.” 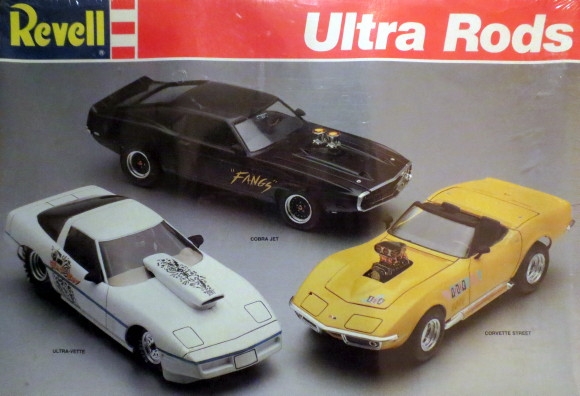 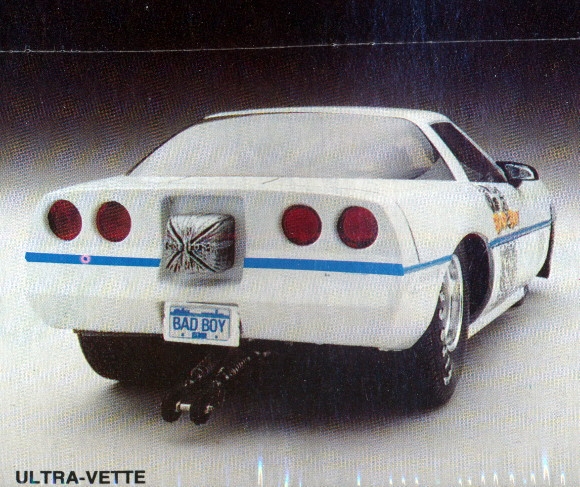 For the final variation of the basic Dobbertin chassis, the Beretta Pro/Street was also released in 1988. The three piece body (body, nose cone, tail panel) this time returns to an opening hood that features a two-piece hood scoop. The engine configuration is the same as the Corvette issue, however the interior panels and upper roll bar cage return to the same parts as the original J-2000. The first issue of the Beretta was molded in black with chrome plated accessories, transparent windows and lights, and black vinyl tires, with the stock number 7168.

Another variation was also released in 1988 as a K-mart exclusive with a collector card, kit number 7188.

The Beretta was also included as part of the Monster Muscle Machines combo in 1989 (stock number 7483) along with a pro/street Ford Thunderbird and a Pontiac Firebird. This version was molded in orange. 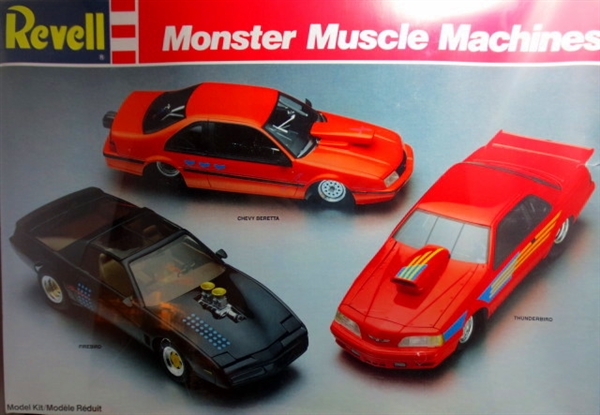 The latest issue of this tooling came out in 2016 as part of Revell’s Special Subjects Program. This time molded in white, an all-new instruction sheet was created to fit in line with the latest Revell design and includes a parts list. The all-new decal sheet includes an option of either flame graphics or stripes for the exterior as well as engine, interior, and license plate decals. Curiously, this issue retains the same stock number of 7168 as the original Beretta release. 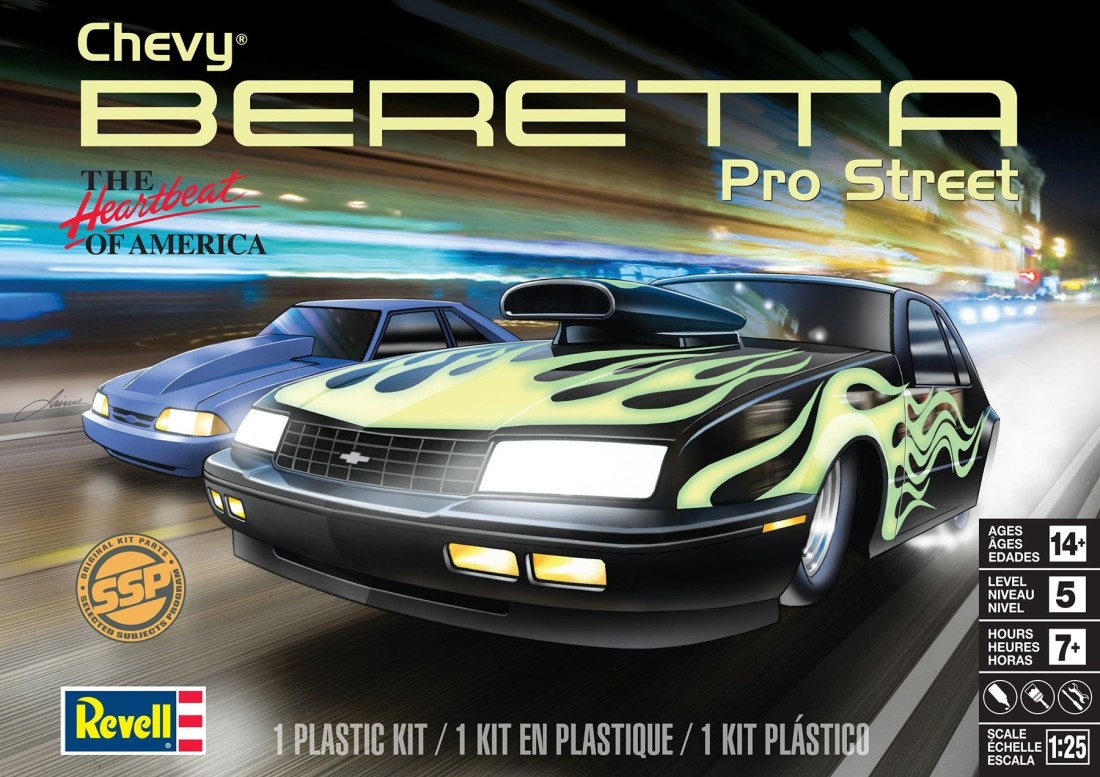 This article contains box art photographed by the author as well as images sourced from eBay listings and Google Image search. Feel free to share this article to other places however please link back to this page.