Monogram’s first entry into this generation of pickup was in 1980 with the issue of Ford’s newly redesigned F-150 pickup. Kit 2262, this version builds into a stock flareside four wheel drive pickup. Molded in red/orange plastic. Wheels are Ford chrome wagon wheels with Goodyear Tracker A-Ts. 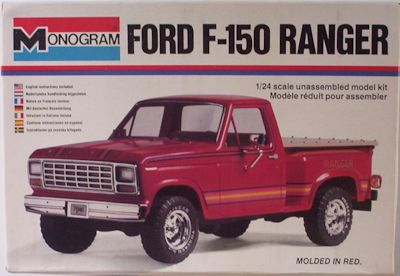 Next in line from Monogram was the companion Bronco to the F-150. Released in 1981, the Bronco borrows heavily from the F-150 tooling, just as the 1:1 vehicles they represent. The chassis is a direct copy from the F-150: shortened to fit the Bronco’s wheelbase, the chassis retains the incorrect saddle tank in front of the rear wheels and replaces the F-150s spare tire with the correct fuel tank between the rails. Options include a roof rack with skis and a brush guard. Kit 2271, molded in black plastic. Wheels are the same as the F-150 kit. 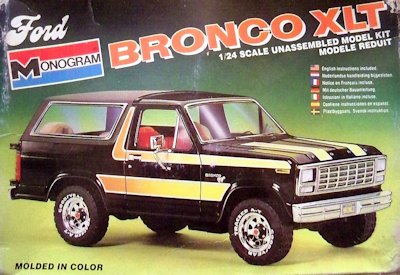 Continuing the company-wide High Roller theme, the F-150 was reissued in 1981. Modifications include a lifted suspension for bigger wheels, brush guard, hood scoop, roll bar with lights, and entry handles on the B-pillars. Kit 2274, molded in blue plastic. Wheels are 14-hole mags and Ground Hawg tires. 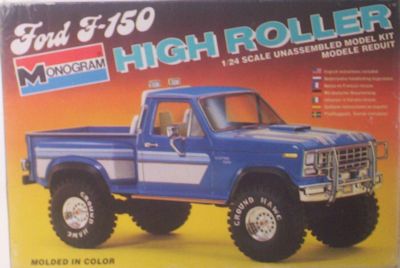 The Bronco was also reissued in the High Roller Series. Modified suspension is shared with the F-150 High Roller. Kit 2286, molded in orange plastic. Wheels are unique to the Bronco kit and are a 5-wedge design; tires are Ground Hawg. 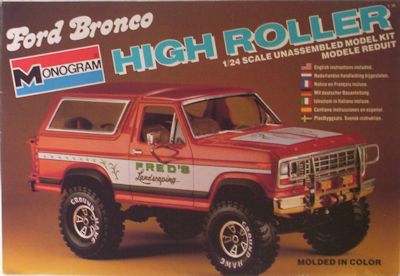 With a monster truck craze sweeping the nation, the F-150 tooling was converted to depict a monster truck. Modifications include a supercharged engine, hole in hood for supercharger intake, monster truck suspension, roll bar with lights, and the Bronco’s brush guard. Kit 2418 was released in 1984 as the Krusher in red and silver plastic. 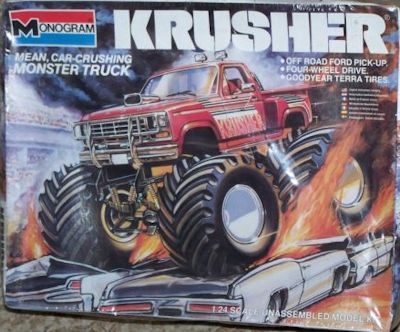 For 1985 the monster truck was released as the Quadzilla as kit 2419 and molded in black and white plastic. The Quadzilla was then reissued in 1991 (with the same stock number) and again in 2002 as kit 85-7702 in black and silver plastic. 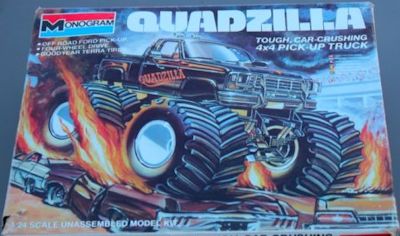 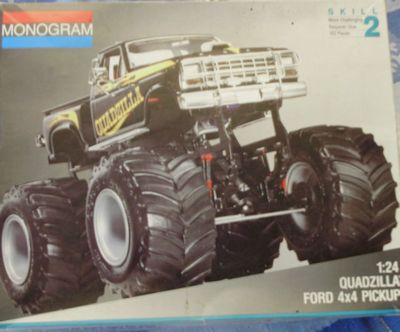 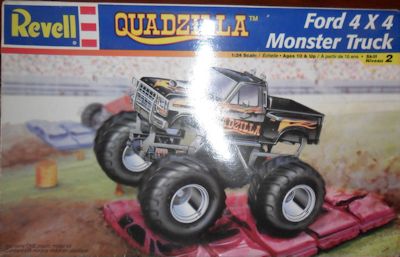 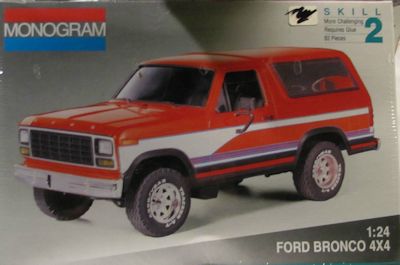 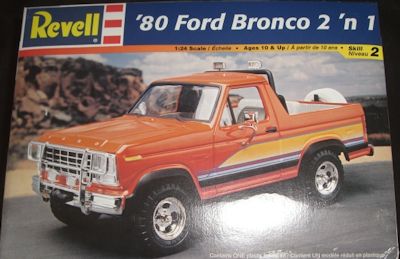 In 2015, Revell apparently found the original tooling for the pickup kit and reissued it as kit 85-4360 in their Trucks series. Molded in white, with an all-new decal sheet, and tire sidewall detail removed. 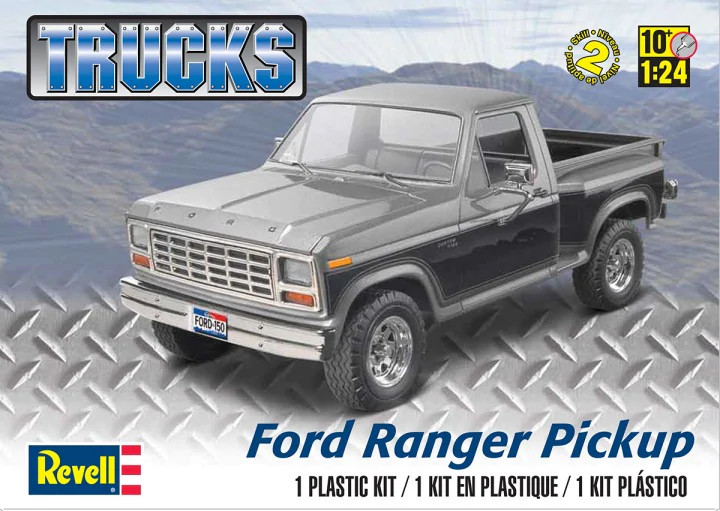 For 1991, Monogram designed a completely new tooling for the eighth generation F-series. The trucks depicted are among the largest trucks on the road at the time. First on store shelves was the 1991 F-250 extended cab, long box, two wheel drive. Kit 2922, molded in blue and charcoal plastic. Wheels are incorrect 5-lug chrome Ford wagon wheels and Goodyear Wrangler R/Ts. Builds as a stock pickup with the only optional parts being cab-mounted clearance lights and a roll bar with lights. This kit was reissued in 2010 as number 85-7212 and molded in white plastic. 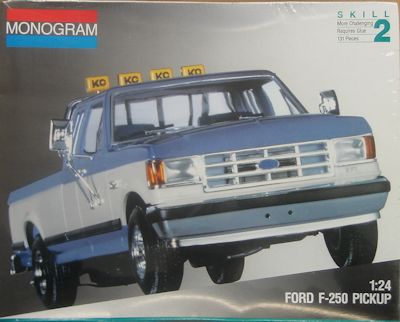 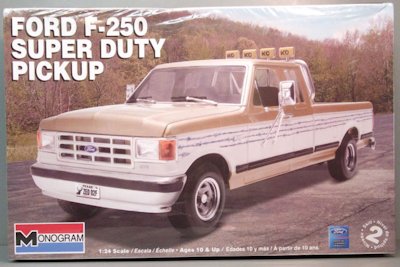 The same tooling was issued with slight modifications to depict an F-350 duallie. Modifications include duallie bed sides and wheels. Same options as the F-250 kit, however on 1:1 duallies the cab-mounted clearance lights are mandatory in most jurisdictions. Wheels are Ford 8-lug dually steel rims. Kit 2948, molded in red and charcoal plastic. This kit was reissued in 1995 with different box art but same stock number and again in 2005 as kit 85-7212 and molded in white plastic. 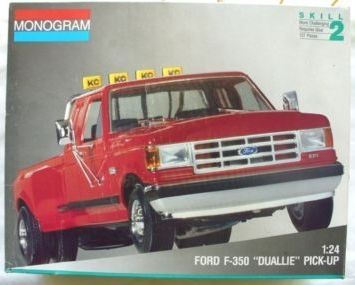 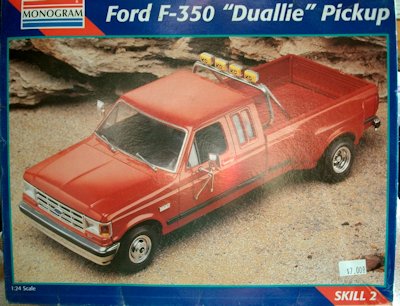 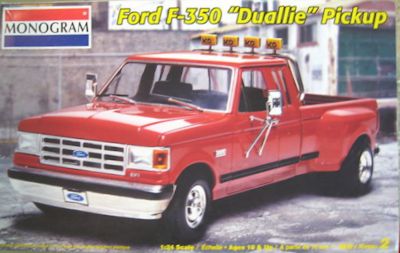 Revell decided to reissue the F-350 kit again in 2016 as part of the Trucks series, this time molded in white with a new decal sheet and all sidewall detail removed from the tires due to licensing changes. 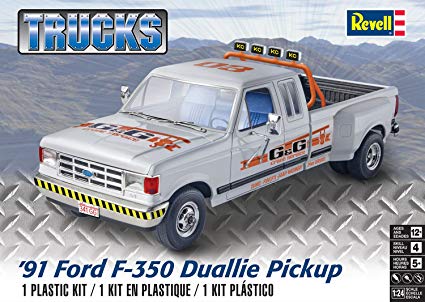 Originally posted on the Model Cars Magazine message board 7 March 2012. If you would like to share this article, please remember to credit the source.